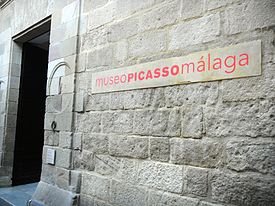 Málaga is a city of Autonomous Community of Andalusia, in Spain. With a population of 568,507 in 2010, it is the second most populous city of Andalusia and the sixth largest in Spain. It lies on the Costa del Sol on the shores of the Mediterranean Sea. Málaga city in recent years became a very attractive place with an interesting offer of culture, monuments and a recently restored charming historical center with a high density of museums.

Málaga has over twenty museums, fifteen of them grouped together in the same area. Historical Quarter of the city comprises 23 museum facilities, making Málaga one of the cities with the highest density of museum in the city centre. City offers plenty of options that suit everyone’s tastes, from religious art to the most contemporary artistic expressions, as well as popular art, interactive museums, and of course not forgetting, Picasso, represented by his Birthplace Museum and the Málaga Picasso Museum. Most of the museums are in pedestrian area, walking distance between one another. Málaga has plenty things to see and explore, I am sure you won’t get bored.

Here you find the most important museums of the city:

How to really enjoy the Malaga’s fair